PHP Frameworks help you to write spotless and reusable codes. It follows MVC pattern, certify a neat separation of logic and exhibition. It helps web developers build Complex Applications and Deliver them on-time.

Yii is Fast, Secured, and Professional PHP Framework; will it suit for my next project? YES, it is! Yii is a Free, Open Source Web Application Development Framework written in PHP5 that assist upright, design and encourages expeditious development. Being extremely performance optimized, Yii is a perfect choice for any sorted projects. It is so efficient and extremely impressive performance when compared to all other PHP based frameworks. It drew very positive attention from all and its popularity and adoption continues to grow at an increasing rate.

The reason why it grew faster is; it is extremely faster than CodeIgniter and Zend Frameworks. As it is more comprehensive than CodeIgniter and improved on structure, yet smaller and more robust than any other frameworks. It enables maximum reusability in programming and can accelerate the development process. Yii is easy, extensible and efficient. It is easy to adopt and use. All you should know is PHP and Object Oriented Programming. It is a self-contained component which can be configured and reused. It extends easily as it contains ever-increasing extension library consisting of user-contributed components, which may help you to reduce your development time.

Yii is carefully intended from the scratch to fit for all kind of web application development. It is not a byproduct or some project; rather it is a result of reflection of the most popular web programming frameworks and applications fused together. Yii uses the BSD license and it ensures financially and lawfully free for you to use its rich set of features. Yii is the fast growing firm framework for now. Here is a comparison chart with other frameworks. 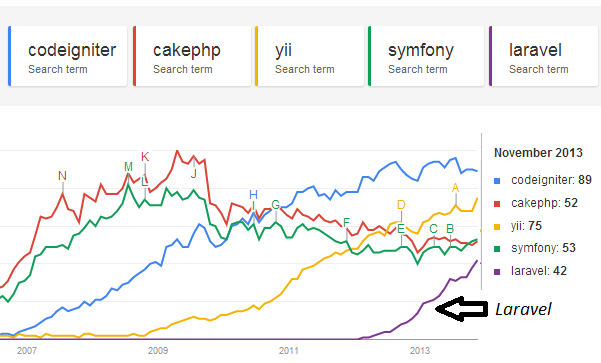 Yii is so quick for process. It has effective caching support. It is clearly structured to work efficiently with AJAX. It only loads the features of what you need.

It’s terrific about its response time. 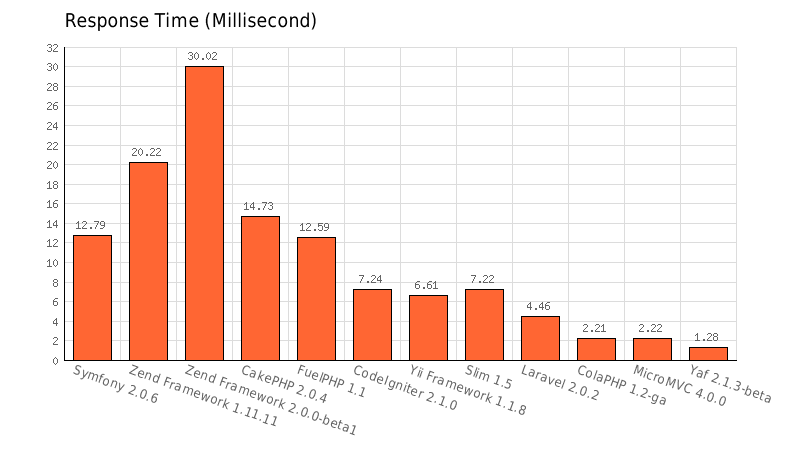 In this bar graph, it explains you Yii responses you with minimum milliseconds.

Yii uses lazy loading technique substantially. Lazy loading doesn’t include any class file until the point which it is needed. It doesn’t create an object until the object is call up for the first time. Every framework other than Yii suffers from the performance hit, because they started enabling functionality whether it is called or not.

Yii is so secured. Three major types of attacks to a website are,

Example: In a poorly made forum, user can enter malicious javascript code to the forum and it will appear in the page.

But in YII, it checks for the all the malicious codes entered and able to block those codes from being entered into the website. CHtmlPurifier inside YII does this justification.

These kinds of attacks are accountable for money loss. Yii makes $_GET requests to retrieve data only, not to modify anything in the server.

Yii is a high performance framework. The graph below shows how efficient Yii is while comparing with other famous PHP frameworks. Here RPS refers “Request per second”. This determines how many requests an application can undertakes per second. The greater in number, the more efficient a framework is. 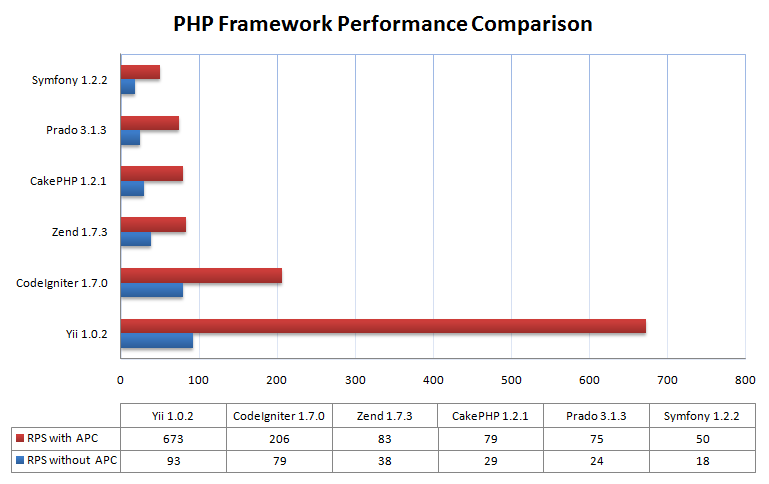 It not only deals with performance efficiency, it also helps us to improve development efficiency.

With Yii’s advanced feature, we can easily generate models and it’s CRUD. This saves your time and makes our process easier. Here, database tables are considered to be objects so we don’t need to query every time.

It is one among the highlighted features of Yii. You can make a relation between tables (one to one & many to one) by a single line of code. For example, we are going to relate two tables named user and profile. User table contains authentication details and profile table contains user’s details. Here one user has one profile so “One to One” relation. For this the relation coding is

Here phonenumber refers to an echo of a detail in user profile.

Support to Ajax and Jquery:

Yii contains widgets which support Ajax and JQuery. It have JQuery dialog so that we can avoid reloading of a particular page.

Yii offers you the default log-in system, in which we can authorize the user. We have to connect the particular model into it. We can also create roles to users by Yii’s inbuilt role based access system. We could even limit the access to a particular user for any module.

By changing one line we can easily switch over to many themes. Within a line code, we can able to create and define web services action.

Caching is a cheap way to improve our site’s efficiency, speed and performance. It reduces the loading time. We store relatively static data in the cache and serving it when it is requested. Yii involves configuring and accessing a cache application component. This framework alone allows us to save both static data and Dynamic active record queries.

Yii offers great support at error handling. It has error handling and exception methods which handle all warnings. If a user is requesting for an invalid page, we can handle it by just adding a single line code.

Yii have a lot of extensions which make complicated development and handling is easy. Yii comes packaged with tools to help test and debug your application, with clear and detailed documentation.

Do you need a Yii Programmed Portal? Then request a quote immediately or contact us